marina abramovic - the artist is present 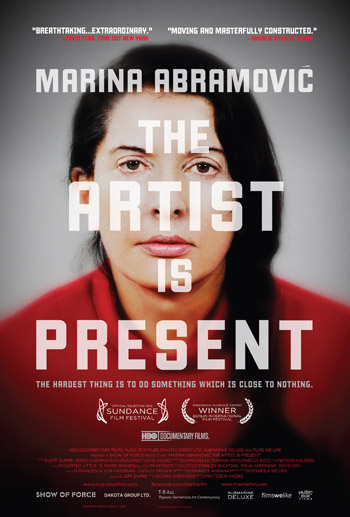 In the weekend, I had the pleasure of watching and reviewing two films before they come out at the New Zealand Film Festival. I watched both 'Barbara' and 'Marina Abramović The Artist Is Present'. My favourite out of these two had to be the documentary on the astounding performance artist Marina Abramović. I may have been feeling particularly sensitive as I watched it due to my terrible flu but Abramović's story and performances completely blew my mind - I cried several times. Abramović is one of the most significant artists of the second half of the 20th century and her story is well worth a watch.

In other, art related news, I am very excited about the current project I am a part of called 'Art on Campus'.  The project is centered around an initiative to get more art and art events on the university campus. Z and I are the student co-ordinators of the project which means we get to work closely with the lovely Jamie Hanton who is the director of Blue Oyster Gallery. This Friday is our first opening with two artists, Siobhan Wootten and Sue Novell. And the great thing is, if you can't make it along to the opening you will still be able to see the art daily while it is installed on campus!


Photo for the Marina Abramović is from here. Also check this link for a more in depth description of the documentary.