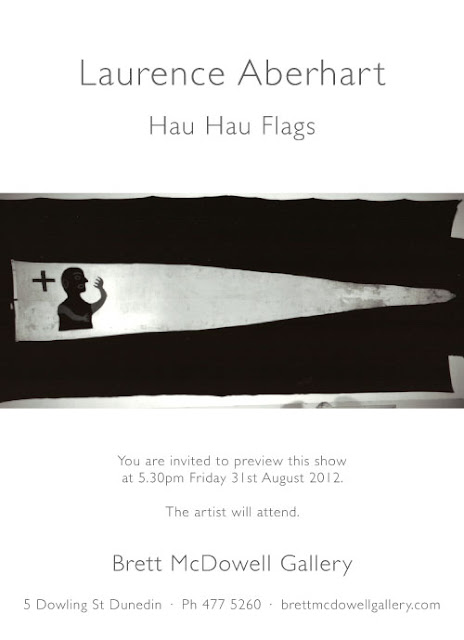 I've grown up with Laurence Aberhart's photos on my walls and his photo books on our shelves. His photos are incredibly moving and important to New Zealand and this assertion remains true on seeing the current exhibition of Aberhart's at the Brett McDowell Gallery in Dunedin. While Aberhart's newer work in the show was less interesting his Hau Hau Flag series was fantastic, especially given the flags' history in relation to Maori sovereignty and colonisation. Interestingly, the flag photographed and printed on the above flyer has gone missing since Aberhart took the photo, making the work that much more significant.

Undeniably, however, the highlight of my evening was meeting Laurence Aberhart himself. On overcoming the inevitable shyness and giddiness that the presence of a brilliant person induces, a group of us ventured up to Aberhart and he proceeded to shake our hands. Aberhart was dressed in the plain, unsubstantial clothes that those with photographic talents so often seem to adorn. His entire attitude was that of a very experienced and humble photojournalist who hardly fitted in with the glitz of the gallery-goers around him. It seemed like he was amused by the whole idea of being at an opening for his photos and slightly bewildered by it (even though he would have had the experience countless times).

Aberhart took us through some of the history behind his photographs of the Hau Hau flags but he never delved into anything too conceptual. All my life I thought Aberhart would have this extremely mysterious, even haunted, personality but on meeting him he was so different to the constructed image I had in my head. On further thought however, saying Aberhart didn't meet my expectations would be wrong. Laurence Aberhart is mysterious but this trait cannot be seen in a five minute conversation with him. Aberhart's mystery and artistic genius lies in those unexplainable situations where a man with his camera ventures out onto a field in rural New Zealand and, on connecting with the objects around him, he takes a photograph of rare power and beauty. Not all geniuses use words to show us that they are a genius.