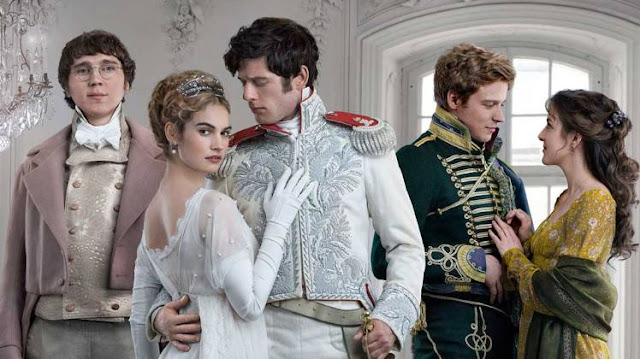 Russia is beautiful in this remake and adaptation of Tolstoy's War & Peace (dir. Tom Harper). Six episodes takes us through its fierce winters and surprisingly cherry summers; we see its hershey-kiss-topped churches, its expansive imperial buildings, and its glorious interiors. But its beauty becomes twisted, ill-fated to the pillages of war ... as well as incest, adultery, and death duels between past friends.

Andrew Davies gave its characters life through his wonderful script. This is especially so with the rambling and inquisitive Pierre Bezukhov (Paul Dano). Dano is a master of weird to many, charming to some. And his strengths are perfectly suited for Pierre -- an illegitimate son whose idealism makes the elite squirm, until he becomes the sole heir to the wealthiest man in Russia.

Pierre's close friend, Prince Andrei (James Norton), is a soon-to-be father, but socialising with wealthy Russians makes him gloomy. To find purpose, he enlists in the war between Russia and invading France. This war initially feels like a side-story, but gradually becomes all-consuming. If the solemn Andrei reminds us of darker things, Pierre's other close friend, Natasha Rostova (Lily James), relieves us with the warmth she finds in family and her excitement and anxiety about love. Although hardly breaking any gender conventions, Natasha is kind and vivacious. It's no surprise that everyone is in love with her.

From snow to skin, the series is one of an overwhelming whiteness that is articulated with British accents, which are slightly disloyal to the original novel. This is a story of indulgence, but it also explores what happens when the lonely few are repelled by the banality of having everything. And each character does suffer tremendously. But in the sentimental, post-war ending where Pierre's voiceover reflects on his learnings, we still can see it doesn't hurt to be wealthy. Whatever happened to those outside the elite, who didn't have money to gracefully cushion their fall following the war, isn't part of this story.