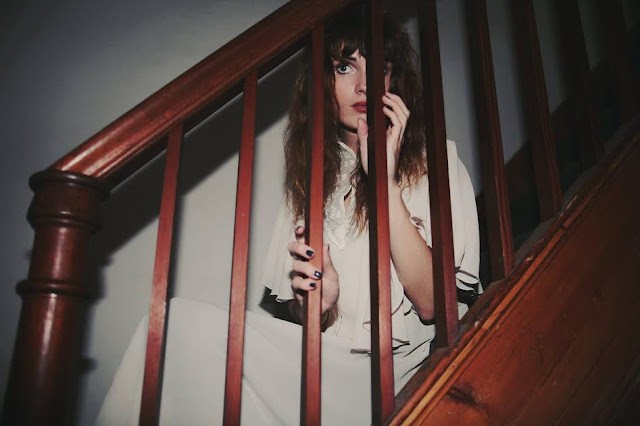 Alanna Eileen has a quiet, pressing presence when she performs. She may describe herself as shy - her music is anything but. Alanna is on the cusp of releasing her first full-length album, which was produced by Ben Edwards (he also produced Aldous Harding's and Marlon Williams' albums). She'll be touring New Zealand in February before the release of her first single. Keep an eye out.

1. How does your self-described shyness and your desire to perform interact?

If you’re quiet and introverted, it can be quite daunting getting up on stage.  Being a naturally introspective and private person makes me nervous about performing, but it’s a great feeling when you overcome it and manage to connect with people.

2. What was it like to do shows with your dad?

It was a valuable opportunity to get comfortable performing in public without the pressure of being entirely solo.  I learned a lot about people and the multifaceted nature of adult life because I was singing alongside my father in bars and other venues while still only a teen.  It was also the first time I realised my voice seemed to have an impact on people and that, while surprising to me, was a great feeling.  It felt like I suddenly had a place in the world.  Additionally, I got better at singing harmonies and that remains one of my favourite things to do.


3. What are 3 words you would associate with your new album?

4. Where and how did you record your new album?

I recorded the album at The Sitting Room in Lyttelton with producer Ben Edwards.  I had been playing shows and traveling around New Zealand for about a month before we were due to record.  I also spent some time alone in a shack in a remote mountainous area and wrote some of the songs that ended up on the album while there.

The recording process itself took three weeks and we tracked a lot of it live.  I felt like a different person by the time we finished.  Ben Edwards is so gifted at what he does.  He’s funny and genuine and fosters a non-judgmental environment that mitigates the anxiety typically associated with recording.  He seems to understand the importance of space or atmosphere and the album is what it is because of that.  He also works extremely dedicatedly and the studio feels like a magical place to make music.

5. Where are you looking forward to playing in New Zealand?

I’m looking forward to playing at Wunderbar in Lyttelton; it’s quite an intimate venue and I really like the shadowy, red-curtained vibe.