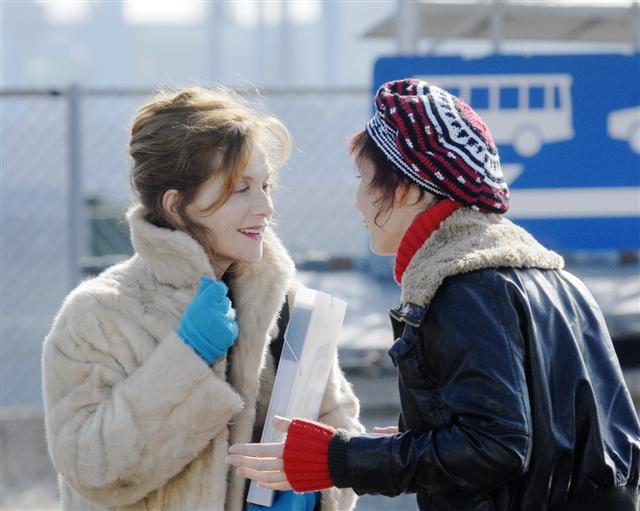 I do reviews almost every week for Critic magazine. Here's my Copacabana review:

Copacabana is a French comedy about a mother called Babou (Isabelle Huppert) who is faced with a relationship break up between her and her daughter, Esmeralda (Lolita Chammah). Esmeralda is very unlike the free spirited gypsy of Victor Hugo’s novel. She is embarrassed by Babou to the point where she refuses to invite her to her wedding. This mother is wild and beautiful. She has wispy red hair and elaborate blue and green eye makeup. She is an older woman who long ago became trapped in a love affair with bohemian adventures and charming rebellion. Babou cannot conform to the conservative rule, obeying mother that her daughter craves.


In the mother’s attempt to impress her daughter and be invited to her wedding she finds a job selling time-share apartments in Belgian. This job opposes Babou’s way of life, but she remains determined to prove herself. After borrowing her reluctant friend’s car, she arrives at a huge building of empty apartments in a fairly deserted Belgian sea side town. She is shown to one of the rooms in the almost finished apartment building where she will both be living and working in. The ocean mist that sits over this Belgian town acts as walls within which the mother paces about, waiting for change. However, it seems Babou can attract adventure even in such a desolate place and what’s more, she finds herself good at her work as a sales-person.

The film does not dwell on hopelessness but rather places the excellent Huppert in a white washed room to let her touch everything around her with colour. Copacabana is about the relationship between a mother and daughter but it also is about those people who are loving and lovable but start itching if they find themselves settling down. This is presented through well framed shots and often lovely and sometimes lonely feeling mis-en-scene.

The script may lack in perfectly executed wit, or humorous cynicism but the film remains charming. Copacabana is the after-dinner mints that you sometimes find on the pillows of a hotel. It’s a simple gesture which is both easily consumed and sweet.