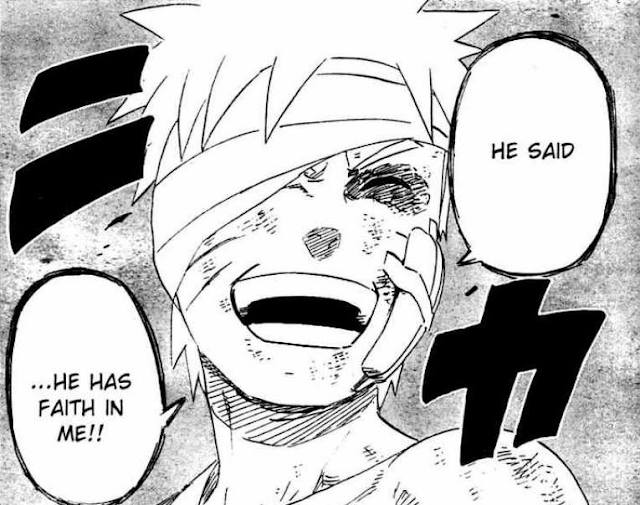 Naruto Uzumaki is a spiky blonde haired ninja who wears a fantastic orange jumpsuit and is the hero of the third best-selling manga in history. Naruto was born from the mind of the manga artist Masashi Kishimoto as an orphan who was initially ostracised by a large part of his community because he had a nine-tailed monster sealed inside him. When Naruto begins his ninja training he appears as a loner/class clown type but bit by bit people realise his potential and, more importantly, his ability to make even the most evil ninja feel an alternative to living a life of vengeance and pain.

A fantasy fiction/action lover, I have returned to this huge series (it has hundreds of chapters) and have become re-hooked. Although the manga has been criticised for sometimes falling into the tropes of shōnen storytelling (which targets a hetero teenage boy audience) and I certainly fall outside of that category, Naruto is such an entertaining, determined and hilarious character that I have somehow found him motivating me.

Naruto is knocked down countlessly but grows from it each time and becomes a better person. The manga is totally indulgent in this way but when it comes to my own small strifes caused by moving out, completing an intensive month-long paper and contemplating the next steps after university, Naruto's infectious attitude overflows from the manga. Selling over 220 million copies world wide, I think a few people might feel the same way.

Email ThisBlogThis!Share to TwitterShare to FacebookShare to Pinterest
Label/tags: inspiration