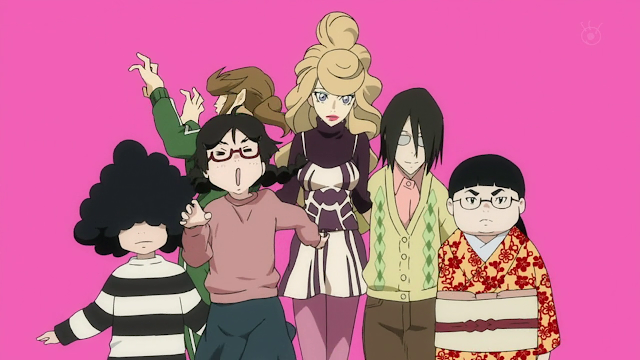 The anime adaption of Kuragehime (Princess Jellyfish), a manga written and illustrated by Akiko Higashimura, only lasted one season. Although it ended far too soon, the series was an unexpectedly hilarious and insightful ride.

Tsukimi Kurashita lives in a two story apartment building in Tokyo with five other otaku women. Encapsulating the subculture, the women fear the outside world (especially hipsters and career women) and have distinct obsessions: manga, trains, very old men, jellyfish, the The Three Kingdoms, and handmade dolls. They live off their parents' allowances, are between 20-30 years old, and are virgins. However, their odd coexistence is disturbed, then threatened entirely.

Kuranosuke Koibuchi is a beautiful young woman who helps Tsukimi save a sickly jellyfish from a petstore. Kuranosuke follows Tsukimi into her apartment and, to Tsukimi's horror, she falls asleep on her bedroom floor. In the morning, Tsukimi finds Kuranosuke still asleep but now undressed -- her wig, clothes, and fake boobs are strewn across the room. Tsukimi freaks out. The 'hipster' is a straight highschool boy who enjoys fashion and cross-dressing, he is also the first boy (apart from her dad) who she has ever properly talked to.

Despite Tsukimi's reaction, Kuranosuke keeps returning to her apartment. Kuranosuke and Tsukimi's lives increasing overlap when they learn that Tsukimi's small apartment building is standing in the way of a large redevelopment plan that involves Kuranosuke's family. For six residents, who turn to stone if they even make eye contact with strangers, saving their building is a daunting task.

Stories like Kuragehime are what keeps me hooked on serial anime. Kuragehime is well animated, often very funny, and it has a great storyline (although it ends abruptly, leaving most plot lines open). Its characters are fascinating too. Kuranosuke confidently explores and displays femininity, more than any female character on the show, but pursues his heterosexuality. He becomes attached to the strange personalities of the otaku women, anxious recluses who have somehow made a world together. Tsukimi is unfaltering with her adoration of jellyfish, and, although Kuranosuke gives her full-blown makeovers, she remains devoted to her friends.

Rather than scrutinising the otaku subculture, which is often framed negatively, Kuragehime uses humour and reflection to show how it can be social and comforting for people who just aren't like the others.